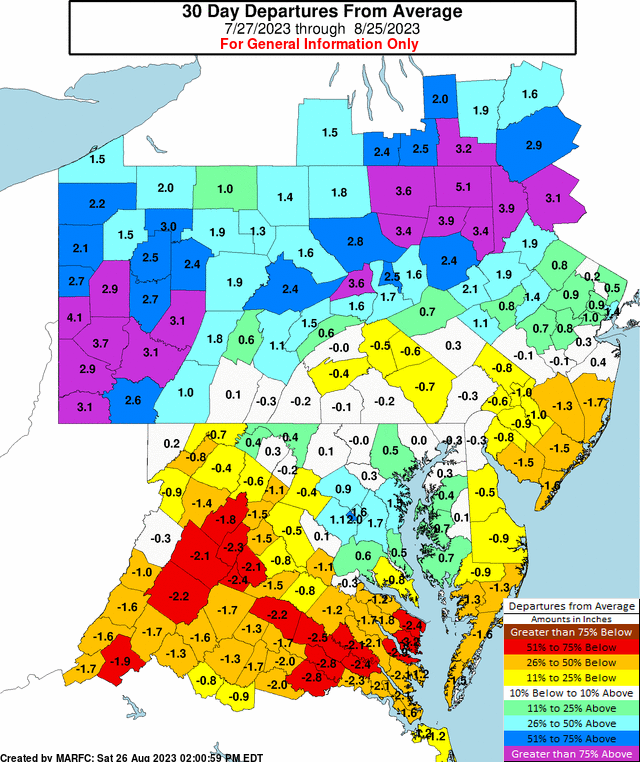 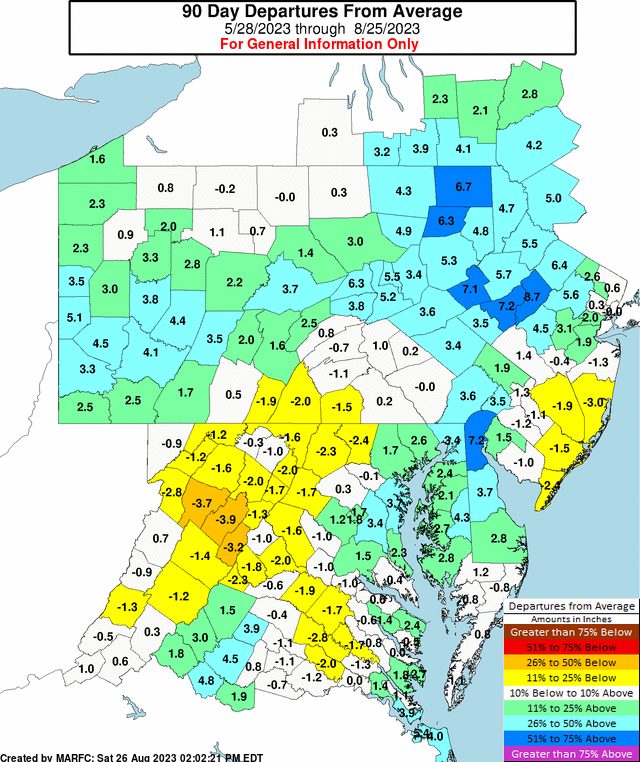 Year to Date Precipitation Departures From Average Calculated by MARFC: 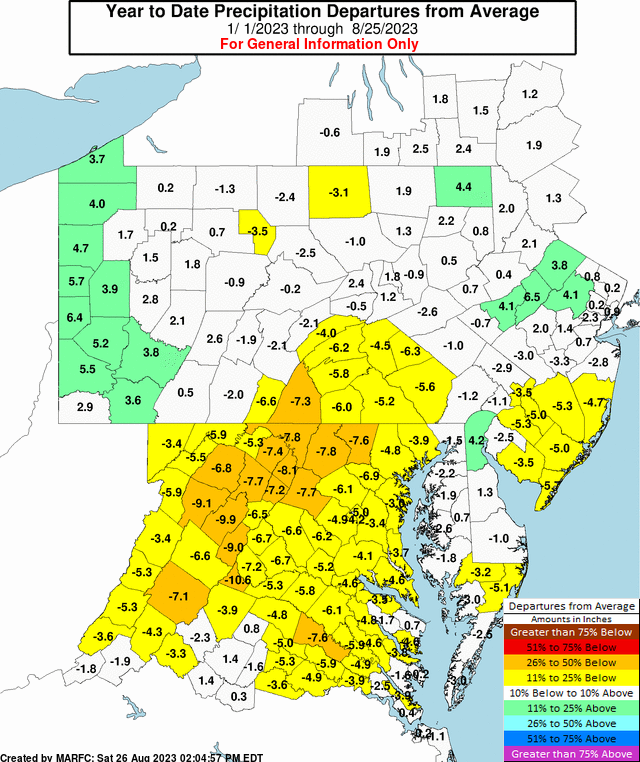 MARFC Precipitation Departure Maps are available for a variety of time spans.

MARFC Observed Precipitation Maps are available to show the most recent precipitation amounts for time spans of the past 72 hours.

Northeast Regional Climate Center precipitation maps are also available for a variety of time spans and on a larger geographic scale.

National AHPS Precipitation Maps are available for a national perspective. FOR THE MOST CURRENT AND UP-TO-DATE INFORMATION, PLEASE VISIT THE NATIONAL HURRICANE CENTER.

The Tropical Weather Outlook for the next 48 hours:

The Tropical Weather Outlook for the next 5 days:

Note: If there are areas in yellow, then these areas are experiencing abnormally dry, but not quite drought, conditions.  See below for additional drought related links. 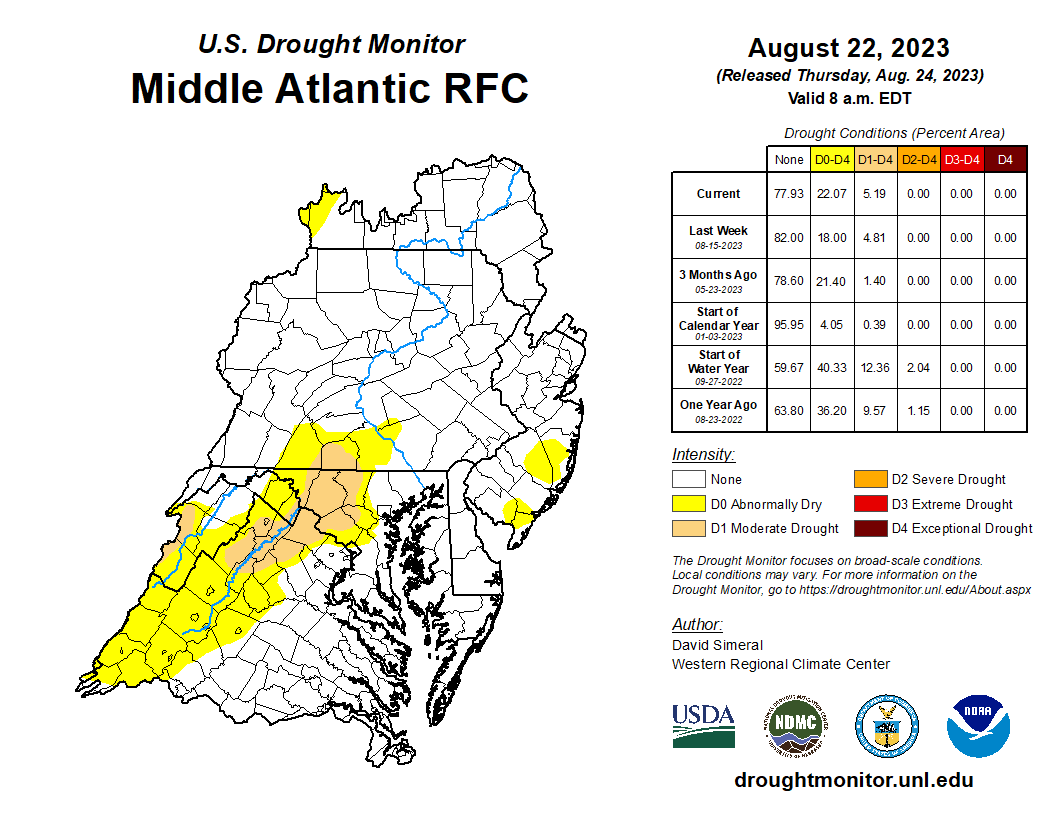 For drought information at any time, use these links:

For drought information and watch/warning/emergency declarations on a statewide level: The MARFC Precipitation Forecast for the next 72 hours: 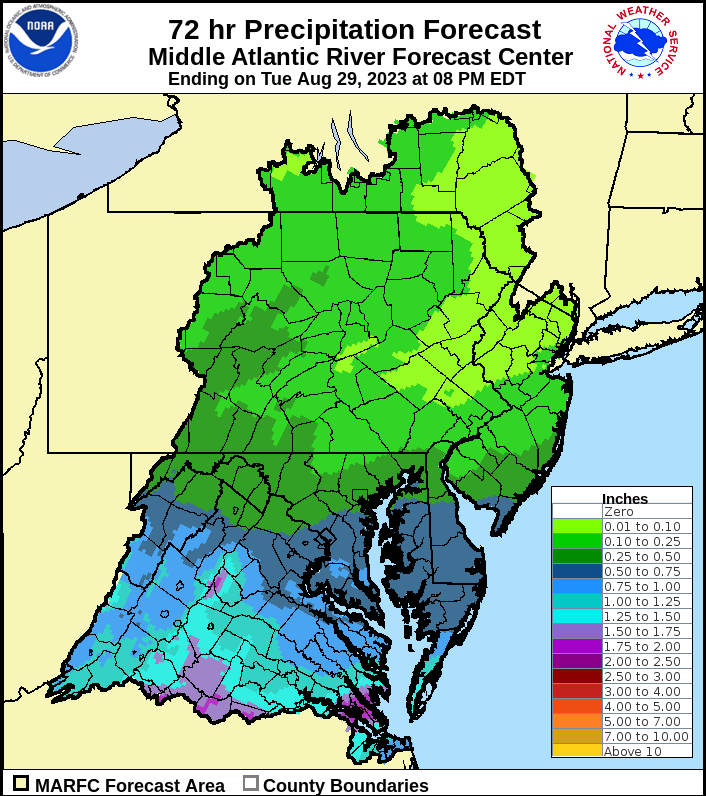 Weather Prediction Center Precipitation Outlook for the next 5 days:

The 30 Day Precipitation and Temperature Outlooks from the Climate Prediction Center:

The 90 Day Precipitation and Temperature Outlooks from the Climate Prediction Center:

Check out Global Weather Patterns to see weather patterns on a larger scale.

Over the past couple of months, precipitation has continued to be scarce for the southern third of the Mid-Atlantic but has remained sufficient for the northern two thirds.  Dry or minimal drought conditions continue for southern areas.  But as increasing rainfall amounts overspread the Mid-Atlantic from north to south, conditions are expected to improve in southern areas.  Overall, near average to above average amounts of rainfall are expected into the summer months.  But, should dry conditions return, especially in southern areas, then increasingly dry or deepening drought conditions will likely become more widespread.